What Would The Tea Party Do?

Just like the Occupiers in the streets all over the world, we are rising up against the corporate corruption of our world, including the corruption of the media.

Thanks to the Citizens United decision, Americans are being constantly bombarded by deceptive political ads by powerful monied interests seeking to influence the minds and the votes of citizens to empower the corporations and their corruption even more.

These ads dispute the truth, smear reality, and attack the facts. The People out there protesting are making it known to those who have wronged us all that we are here to reclaim our world. That is precisely what you are doing when you Occupy Your Local Media. By writing emails and letters to the editor, calling television and radio stations and making your voice heard about these ads, we are sending a clear message that we are not just going to sit back and let corrupted monied interests corrupt our media. They have to tell the truth or they are not welcome in OUR media. We must EXPECT BETTER, and DEMAND THE BEST!

The Occupiers and Protesters never get their demands fulfilled immediately, however the long term impact of a steady and powerful protest that doesn’t go away WILL have an impact. We are beinnging to win the war on this horrible Supreme Court decision in favor of Corporations as People, but we as individuals must raise our voice to those who manage these ads and let them know we will not subject our families and ourselves to these deceitful, hateful, corrupt ads! 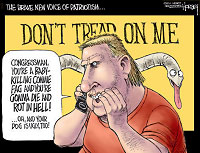 WHAT WOULD THE TEA PARTY DO?
The Tea Party wouldn’t let any opportunity pass them by, and they would never quit. That’s why they are so effective. One thing the Tea Party did we should never do is be rude or violent in any way. Do it right, be polite!

Occupying your local media is very simple to do and effective. When you see one of those deceitful ads, take note of the channel, time, and ad, then get the email and number from the internet for that station. Call them once in a while, and write emails often (always be respectful). Let every ad you see focus your energy on letting them know you are not going to just sit there while they have political wardrobe malfunctions against the Truth.

The media always needs to be monitored and kept in check. This is an ongoing protest that will never end, ever vigil, very vocal.