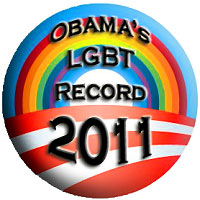 President Obama is the most pro-gay president in the history of the United States. The accomplishments (still being) racked up for the LGBT community are significant milestones in the history of the progress towards greater equality. It will be very difficult to ever exceed this much support.
I Challenge you to honestly read each and every single one of these accomplishments and declarations and really think about it. Don’t just skim through! Some very important things have changed thanks to President Obama. See for yourself what has been done. The following list of declarations, actions and accomplishments are still happening and have been brought together from the various sources on the internet and from Obama/Biden’s website Progress For LGBT Americans. Remember to check back on this post periodically to get all the latest updates.
Due to the load time for videos, the full record is divided into individual years. Click on the Year, Next, or Previous.

Jan 25 — Healthcare.gov released a memo highlighting the benefits of the Affordable Care Act for LGBT Americans.

Feb 23 — “Declared the Defense of Marriage Act unconstitutional and announced the administration will no longer defend it in court.”

Mar 31 — “Completed an Institute of Medicine study on LGBT health, the first of its kind.”

Jul 19 — “Endorsed the Respect for Marriage Act, a legislative effort to repeal the Defense of Marriage Act.”

Jul 22 — Statement by the President on Certification of Repeal of Don’t Ask, Don’t Tell

Aug 18 — “Clarified the meaning of ‘family’ to include LGBT relationships, helping to protect bi-national families threatened by deportation.”

Dec 1 — “On World AIDS Day, recommitted the U.S. to creating an AIDS–free generation.”